I was most intrigued when I saw a snippet of a recent article in the China Daily about the new U.S. ambassador to China: 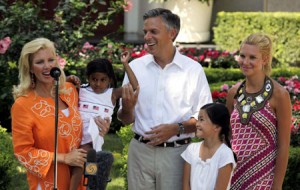 This surprise me because I thought the new ambassador was Jon Huntsman. Turns out he is, and this is just the classic “he/she/(it)” mix-up.

It could be an innocent typo (of which I myself make many on this blog!), but more likely the article was either written by a native speaker of Chinese or the article was translated from Chinese (couldn’t confirm). Here’s the full quotation:

“The ambassador also introduced her family to the media in fluent mandarin and invited reporters to enjoy an episode his eldest daughter Mary Anne played on piano in the living room.”

For anyone new to the “he/she” fiasco, the defense usually goes like this:

“We Chinese have only one word for ‘he/she/it’: tā. So when speaking English we often make mistakes. It’s a case where a divergent concept in English (like doubt/suspect, borrow/lend) is responsible for this mistake as well as others.

“Yes, but when writing Chinese characters you have to chose one of three depending on what you’re talking about. 他,她, and 它 are all pronounced tā, but mean ‘he,’ ‘she,’ and ‘it,’ respectively. And now here’s an article in a major Chinese publication that shows the mistake in print, even though there is no divergence between the Chinese and English writing of ‘he/she/it.'”

I’m not really interested in a “verdict,” I just thought it was interesting to see more evidence that the “he/she” problem isn’t just in the realm of speaking (my writing students in China have been known to write “he/she” wrong from time to time even when talking about their own family members!).

And now, just to indulge my fantasy of becoming a forensic linguist, I’d like to point out that whoever wrote the article was most likely trained in British English because of the collective treatment of “family” here:

“Now my family are very happy to come here to serve on behalf of the US government.”

I think Mr. Huntsman would have said “my family is very happy,” hence my theory that this has been translated into English by someone trained in British English.

9 Replies to “He/She Mistake in the News”